On Monday, Andy and Harrison attended the careers fair at Kingsbridge Community College in a bid to inspire the next generation of engineers and technicians. We distributed information from both the ICE and the IStructE on routes into engineering as well as the vast number of different roles and career paths a degree in engineering can lead to.

Almost half of PCA staff were educated at Kingsbridge Community College and we were pleased to give our time to speak to the engineers and technicians of the future.

The staff at PCA regularly attend and host CPD workshops to ensure we keep up to date with the latest technologies and to refresh existing knowledge.

Recently, engineers attended a course held by The Fell Partnership who are the local distributor of NUDURA insulated concrete forms (ICF). An alternative to traditional build methods which is quick to install and sustainable.

We have a number of projects utilising NUDURA ICF in the detailed design stage at present as well several completed projects and look forward to seeing it used increasingly in the future.

For more information and if you are considering using NUDURA ICF on a build contact PCA or visit www.thefellpartnership.co.uk.

PCA Consulting Engineers’ PA Linda Capon soared to new heights when she took to the skies over Bodmin Airfield on the wing of a Boeing Stearman Biplane.

Linda had always wanted to do a wing walk but it wasn’t until her 65th birthday that she got the opportunity to do it.

To make sure she couldn’t change her mind at the last minute, she decided to raise money for two Cornish charities.Linda was originally hoping to raise £65 each for both iSightCornwall and

Cornwall Hospice Care to mark her 65 years. However, she more than doubled her target, raising almost £300 in total.

Linda said: “Although wing walking is something I’ve always thought looked fantastic, when presented with the opportunity to do it, I have to admit to feeling terrified at the prospect of standing on top of a small aircraft travelling through the air at 130mph!

“I can honestly say I loved every minute. The whole experience was amazing; everyone at the airfield was so friendly which really put me at ease.”

First floor steels being positioned ready for the beam and block first floor to be laid in Thurlestone. 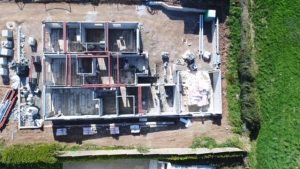 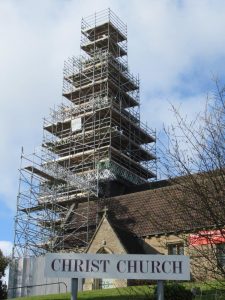 PCA are working with Jonathan Rhind Architects and Wells Cathedral Stonemasons, with repair works hopefully completed by the end of June 2018.

The project has been made possible by Heritage Lottery Funding together with a tremendous fundraising effort by the local community.

We are pleased to welcome Claire Massingham to our team. Claire has just relocated back to the UK from the British Virgin Islands and joins PCA as an administrative assistant.

PCA recently designed a piled crane base strong enough to allow a large crane to lower and retrieve the plant and materials required for repair works to a jetty in Salcombe. The pictures show the plant being expertly and safely lowered into place.